Curious to learn more about Shell? Register for the various events lined up this year and take the opportunity to get to meet our people and learn about our culture.

A casual virtual lunch chat with our Graduates. Come as you are with your lunch, and with any questions you may have about our Assessed Internship programme, life at Shell, and more – you decide the agenda!

Inside Energy with Shell

Come find out what happens inside Shell and our commitment to our net-zero climate ambition.

At Shell, we believe in creating a diverse and inclusive culture for all. Come and meet our female engineers and commercial leaders to hear their sharing on how Shell have helped shape their career.

Designed to give students a peek into Shell, Shell Experience Day 2019 invites all students interested in Commercial/Function careers, for a full day of fun and experiential learning. 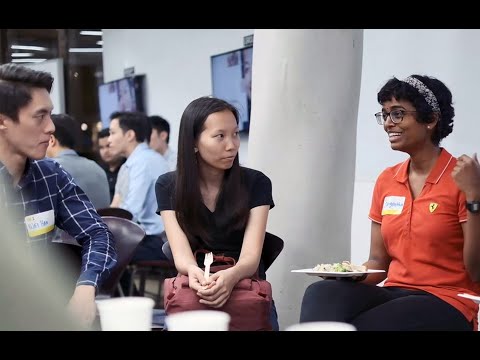 This video begins with the Shell Pecten and call to #makethefuture. It then fades into a male student at an event, with a banner behind him that reads “Could you make a great team even better?” A soft trill plays in the background. The student declares “I'm here to really explore more about the Oil & Gas industry and what the different functions are in Shell.”

The scene shifts to another student, this time, a female who says, “My curiosity--I really wanted to know more about what Shell has to offer.”

A third student of Indian decent then speaks: “There aren't many technical structured programmes out there.”

The background shifts to a hieroglyphic wall of a university, suggesting a different location. Two female students appear, one asking, “What is the culture like at Shell?”

As the music begins to speed up, the camera pan shows the entrance of The Alcove, where the Shell registration table is. Two banners are on display, challenging students: “Could you energise the future of energy?” “Could you make a great team even better?”

Cut to shots of a lamp, the view from the top of a university student centre, and students registering. Cut to a shot of a female student getting her nametag sticker at another location.

Cut to a close-up shot of one student writing his name on the sticker. Cut to another student registering at a seemingly different venue.

Cut to a Shell representative confirming a pre-registered student’s attendance at the event.

Cut to a shot of students engaging with a female campus ambassador dressed in red.

Cut to a wider shot of students in broken down groups, each with a designated campus ambassador wearing the red ambassador shirt.

Cut to another location, this time with a greater number of students gathered in round tables, each table with a designated campus ambassador. All ambassadors can be identified by the red shirt they are wearing.

The scene closes up on a female campus ambassador, prior to the beginning of the event. She says, “Going to work at Shell every day is quite exciting because you never know what is coming up next.” While she speaks, the camera captures her engaging with two students at a more intimate campus event.

Cut to the Graduate recruiter and host presenting as students listen and pay close attention to him. Cut to a woman engaging with a table full of students.

Cut to a shot of two campus ambassadors, one saying, “It's really not hierarchical at all, so you can go up to the General Manager saying, ‘Hey Steve, can I have some time?’ Everyone will gladly and willingly share their time with you.”

The music takes a deeper tone as the scene features more personal one-on-one interactions between campus ambassadors and students.

Cut to scenes of more group discussion between a campus ambassador and a small group of students. As we close-up on one female ambassador named Tracie, she shares, “One of the first few things I learned at Shell was how to be more inclusive towards differences.”

Cut to Tracie speaking in front of a group of students, first shot is of her alone, the next shot is of the entire room.

Cut to a student standing up, speaking during the event, engaging with the Graduate recruiter, who appears in the next scene.

Cut to another event, the scene shows the Graduate recruiter speaking to the room of students. One male student states, “I feel that everybody who works here accepts diversity. Even though I am not very experienced in that sector, they (Shell) are giving us a lot of opportunities to shine.” Shots of students’ reactions during the engagement are shown. The students appear to be enjoying themselves, smiling throughout the dynamic group discussions.

Cut to a campus ambassador, a female Indian, engaging with her group of students, as they snack on some food. She says that, “At Shell, you will be pushed beyond every aspect to be a better self.” The camera closes up on her as she claims: “That is what I feel you can learn when you come to Shell.”

Cut to more shots of campus ambassadors sharing their own experiences in front of students.

The scene zooms in on another female campus ambassador. “As a student, we go for so many different networking events,” she shares.

Cut to scenes of this female campus ambassador engaging with different students. Voiceover: “but the one at Shell was different for me because I felt like I could speak to anyone.”

Camera closes up on her once again as she says, “They were really willing to share, not just the polished version of what they wanted me to hear, but what they genuinely believe. Authenticity is a very important value to me.”

Cut to a scene of the Graduate recruiter speaking in front of a room of students in a café-like room.

Cut to another venue showing students in smaller groups, engaging with one campus ambassador per group. There is a photobooth wall in the background.

Cut to a group of students, two male, one female, outside by the registration area. One male student shares, “Today's event helped me understand the Shell culture, as to how their workplace is like.”

Cut to two scenes of students speaking with campus ambassadors after enjoying some snacks.

The camera zooms in on a male student attendee who says, “I am actually impressed that Shell managed to get a lot of Student Ambassadors down because I feel such actions can give a personal touch to graduating students like us in terms of them relating the future careers to us.” As he speaks, we catch glimpses of more students and ambassadors throughout the engagement.

The music has sped up quite a bit at this point and one could feel it coming to an end. More interaction between students and ambassadors are shown, clearly demonstrating the comfort and trust between the two parties.

Cut to a close-up of one female and one male campus ambassador. The lady is smiling as the gentleman encourages, “Don't be afraid to join the Shell events like Site Experience Day or even do an internship with us, and you can see for yourself if this is really the right fit for you.” As he speaks, more scenes of the Shell campus ambassadors with students are featured. The video begins to close with scenes of students and ambassadors goofing off at the photobooth. The scene fades to white, the music comes to an end. The Shell Pecten appears as the Shell trill signifies the end of the video. A caption reads: “See you at our next recruitment event. Shell.com.sg/careers”

Could we make a difference together

How can you contribute to the world

Could you fuel the energy of the future

Meet, and be inspired by, our pioneers, innovators, adventurers and explorers across the world. Discover their stories and get an insight into careers at Shell.

We believe in creating an inclusive culture where you can thrive. Find out why diversity and inclusion is important to Shell.

Are you ready to discover a career journey with Shell? Explore our degree matcher for all opportunities.